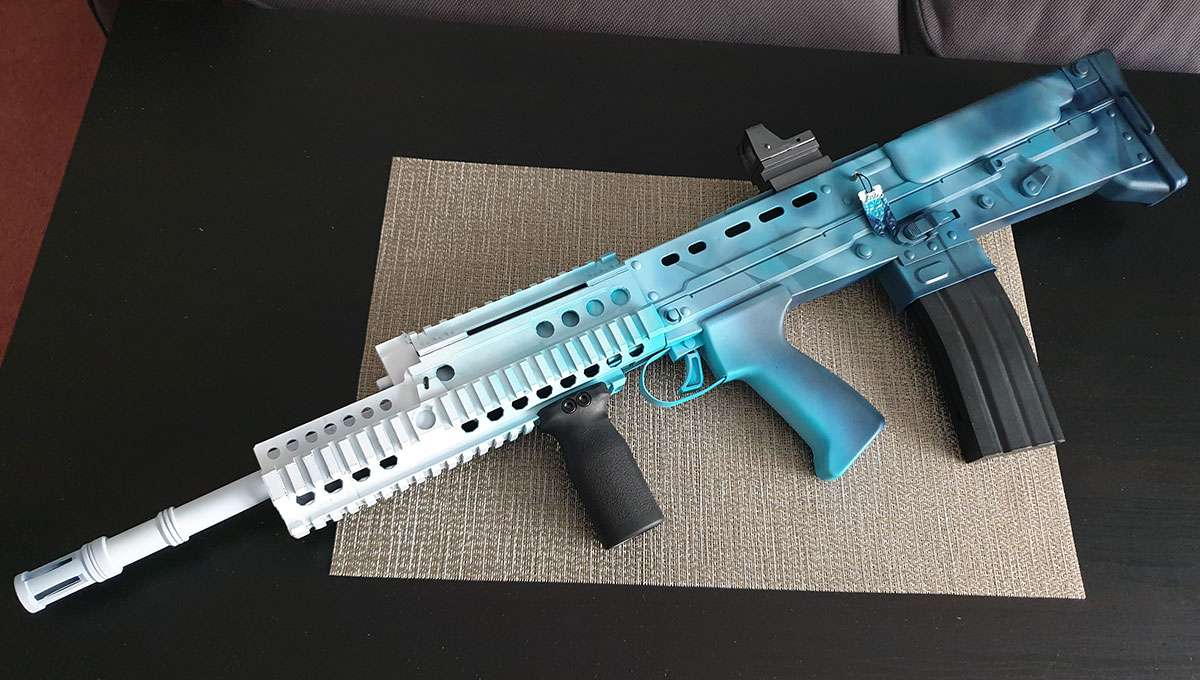 Today I finished my replica of the L85A2 for my upcoming Sledge photoshoot on the 1st of March. Here’s how I made my Black Ice skin.

I am based in the UK, and under UK law it is illegal to repaint an airsoft weapon or create Realistic Imitation Firearms (RIFs) unless under specific circumstances. Excluding these circumstances, over 51% of the firearm must be a bright colour. Please exercise caution when repainting firearms, and take note of your local laws.

Sledge’s primary weapon is the SA80 L85 variant rifle. It’s my favourite weapon in the game, and capable of taking on all opponents with ease. I purchased a Vigor L85A1 SA80 Spring Rifle, in two-tone blue. It’s an entirely plastic body, and only required a few modifications to convert it from an L85A1 to an L85A2.

Initially, I wanted to replicate the Collector’s Pack skin for the L85 but due to the local laws here in Scotland and the UK, it would be classed as an RIF and therefore illegal without proper permits. So, I opted to go for the classic Black Ice which easily falls under the legal limit of over 51% bright colour.

I wanted to try and keep it as accurate as I could to the skin in-game, and while there have been some amazing replica Black Ices in the cosplay community, most seem to substitute the details for painted on cracks in white.

As this was an L85A1 rifle, and not the L85A2 variant, some modifications were needed to convert it to be screen-accurate. The first, and most obvious, was the swapping of the front handguard to a rail-guard system on which a forward vertical grip could be added.

Removing the guard was easy, as it simply unscrewed. However, sourcing the rail guard was a challenge and so I opted to 3D-print a replica of it from a 3D model I purchased under a commercial license (I may yet make it available on my store).

In order to ensure the correct scale, I first printed off a small section of the guard and then fitted it onto the L85 before altering the scale as needed.

Thankfully, I only needed to do this once, and then went ahead to print the full rail guard.

There was always an option to purchase a metal one for airsoft rifles, but these are expensive and I did not want to pay upwards of £150 on a part I could make myself.

Once printed, I removed and cleaned up all the support material and attached it to the L85 with hot glue and heat welding, ensuring that it would not detach when in use.

For the painting of this, I used an airbrush with Golden brand high-flow acrylics:

The first step was to prime the rifle in white. This took a little longer than I had liked it to, due to a partial clog in my airbrush, but I felt I got better results than simply using white spray paint which might apply the coat too thick. Using the airbrush also allowed me to reach into all the nooks and crannies that would be difficult with a spray can.

I covered the entirety of the rifle in white, before adding a clear matte coat to protect it. I used a generic brand off of Amazon for this.

Next, it was time to add the first part of the frost gradient. Using Teal, I marked off the section at the handle and trigger, adding the gradient using low-pressure on my airbrush facing forward towards the barrel. This creates a very soft, but detailed, gradient that matches the skin well.

Then, I filled in the back half of the gun with Teal, stopping before the magazine mount as I didn’t need to go farther.

Next up was the addition of Ultramarine Blue. Using the same method as when I applied the Teal, I created a gradient on the rear of the handle facing forwards towards the barrel. This helped blend the two colours together in a soft, but stark, transition.

The entire rear of the rifle I then painted with the blue, adding pressure to certain areas so it wasn’t an even flat coat. This helps add some depth to the skin once the top layers are added.

The next step was adding the detail that quite a few Black Ice painters miss; the ice shards. Black Ice has an effect similar to what happens to glass on a cold day, or if you leave some flat metal outside on a frosty night. Ice crystals form these beautiful patterns that link up together, and shine when your perspective changes.

To achieve this, I mixed some Ultramarine Blue (7 drops) with some Carbon Black (2 drops). Then, I used some masking tape to create shard sections which I painted using a brush. This thicker coat of paint appears shiny compared to the lower coats, and helps give the ice effect well.

The final stage of painting was to cover the shards in a combination of Ultramarine Blue, Teal and white. I did this in an uneven fashion, focusing the darker colours nearer the shards, then surrounding those with white. As stated before, the shards ended up having a lovely shiny surface underneath the topcoat, giving it a great appearance of being icy.

Due to time restraints, I didn’t add as many dark shards as I’d like to. However, I will be adding them at a later date. Another addition that I, sadly, didn’t have much time to work on was the addition of fake snow – Black Ice has texture in the form of snowflakes, and I wanted to replicate this using absorbent fake snow that you can purchase from the store. Again, in the future, I’d like to explore the possibility of adding this.