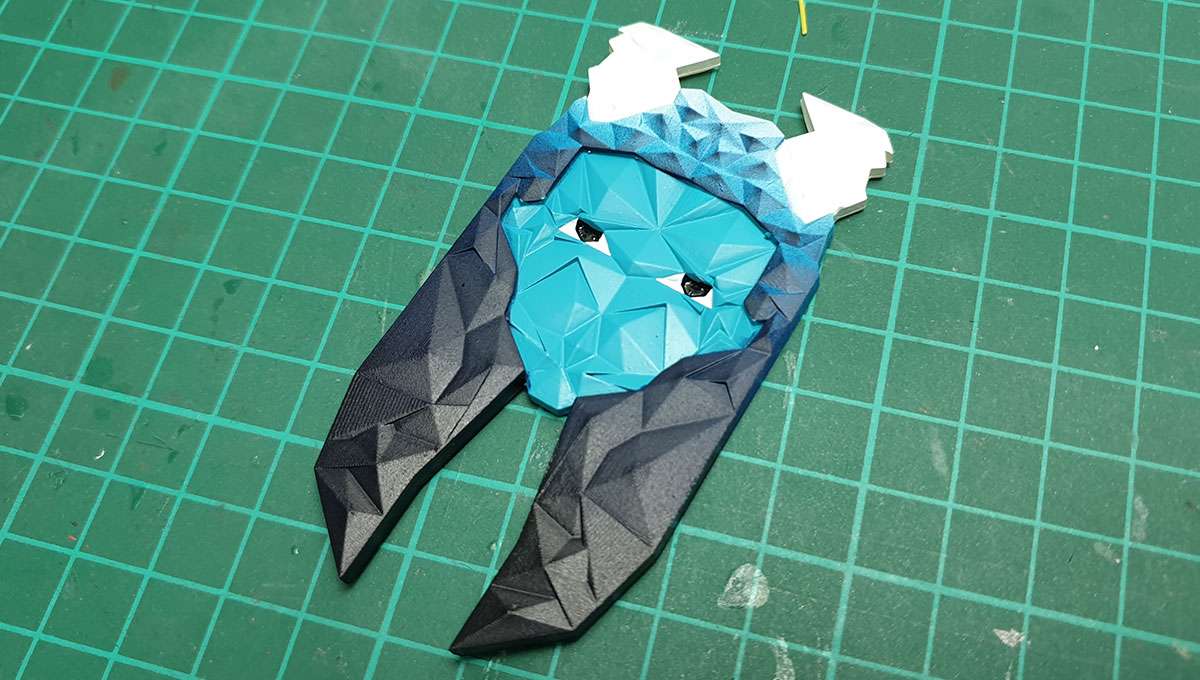 A very special commission came in from the wonderful JessGOAT, and I have had the privilege to work on something exceptional.

JessGOAT reached out to me on Twitter before the release of her charm, which looks amazing btw, with a special request. She wanted to have her very own physical charm, as well as something else to have in the background of her streams when she got to Europe (I had previously made her a Black Eye Camera and a Recon Drone, which her partner Giulia has fiercely guarded all this time).

I was given an exclusive sneak peek at the charm, and asked if it was possible to make a reality. I won’t lie, the design is quite difficult – it’s full of polygons, large and small, and the reflection of the light against each surface made it difficult to transfer into a 3D model.

I first started by taking the design and importing the image into Fusion360. From there, I started tracing out the outline after working out the scale (it’s about 43mm long) and began working in the key features; the horns, the face, the shape of the hair and the eyes.

From there, the challenging task of identifying high and low points on the polygons was before me. A few were easy, thanks to the highlights, but in areas like the lower hair I had to take my own guesses. Thankfully, the design is a mirror of itself, so I only had to work on one half before mirroring it at the end.

I painfully managed to work out the polygon shapes, locations and depths, but needed a base to work from. I extruded the profile of her charm into three distinct bodies; horns, face and hair. I then added different depths to these, as they’re slightly offset on the charm itself – the horns aren’t as far back as the face, which is behind the hair.

From there, I began extruding and modelling the polygons onto these master bodies – checking that they didn’t go beyond where I wanted them to go. The face had some high polys, which I had to keep below the level of the hair. This meant in some cases I had to further lower the face, and thicken the body. Not forgetting I had to then embed the eyes into the charm later.

Slowly the charm began to take form. The horns were the first to be finished, followed by the face. I left the most challenging part of the design, the hair, to last. But even looking at it unfinished I was excited, and hopeful that Jess would love the result.

The design process took several days, but in the end I came up with something that I am very proud of. Once all the polygons were in place, welded to their respective master bodies, I mirrored the model and combined the bodies to complete it. A small hole at the top was added for a keyring hook, 8mm x 1mm, and then a skilful rotate and pose before rendering took place. I sent off the render to Jess for approval, which she gleefully gave.

I had decided to make this in resin because of the amount of detail required in this model. There were a lot of slants, points and depths which wouldn’t transfer well in traditional 3D printing – plus, it would require extra post processing to finish if I made this in plastic. Sanding this would be extremely difficult, and a lot of detail would be lost.

Resin printing allows me to keep the detail, but with the added con of cleanup using chemicals. But the results are astounding, and I still use it for all my detail pieces.

While the charm was printing I took the opportunity to do a small Black Ice paint test, as I’d never painted the Black Ice skin before. It looked quite simple, in some regards, and I’ll be doing a tutorial here soon for those interested. Needless to say, I need to buy more white and blue paint!

After curing, the charm was ready to go! Honestly, I was quite nervous at this point. I held in my hands Jess’ charm, hopeful and anxious that I could paint it to the degree she expected.

I gave the charm a basecoat of white, before masking off the horns and moving onto the blue. Black Ice is all about layering the colours, so it was a test of patience to make sure I got them all correct. My Black Ice test helped a lot, especially in determining the correct colours to use for the charm – Jess’ has a bit more green in it, and isn’t purely aqua.

After a few more masking’s and base coats, the charm was beginning to look like it does in-game. I was getting excited that the project was nearly finished, and with a few brushstrokes it was done!

Overall, I’m very satisfied with what I’ve managed to achieve with this charm. I learned a few new tricks, especially in working with Black Ice. But it was, above all else, a hugely proud moment for me to work for such an amazing person and bring to life their achievement.

JessGOAT is a fantastic person, amazing streamer and caster, and an inspiration to me. I wish to thank her immensely for letting me work on her charm and build something truly special.

Please check out JessGOAT on Twitter, Instagram and on her Twitch channel where she regularly streams Rainbow Six Siege. You can also check out the GOATFarm merchandise here.