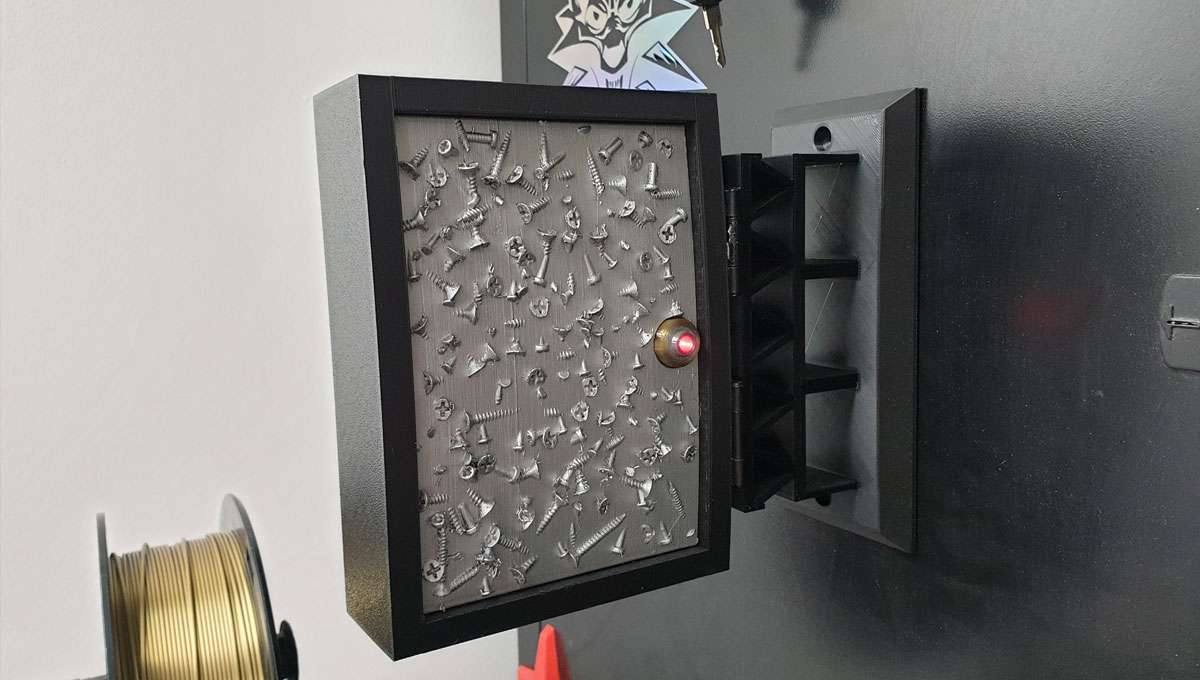 Out of all my props from Rainbow Six Kapkan’s EDD has been one of my most-requested props for a long time, but one I’ve put off making for almost as long. Not anymore.

I believe I was first asked to make Kapkan’s EDD by Kapkanadian on Twitter. I had already taken some reference shots in Rainbow Six Siege, but never got any farther than a very basic shape or design. I had other props to focus on at the time, as well as some personal stuff.

At the end of 2020 I decided to stop procrastinating, and get to work on either revamping my existing design or nuking it and starting again. I chose the latter, and began building it up from nothing again.

Kapkan’s EDD is his defensive gadget from Rainbow Six Siege, and allows him to block enemy paths and take out attackers who push through doorways. It attaches to doorframes by screws, and everybody knows the telltale sound of Kapkan drilling them down.

3D printers can be extremely precise if you dial them in. My printers have a tolerance of 0.02mm – which means I have to model this into any moving or nesting part to allow clearance. I was initially looking at 3D printing the hinge in plastic, but it would be carrying a lot of weight, so decided against it.

The next problem was a tough one – how the hell was I going to mount this prop to a doorframe? I opted for two screw holes, so that dedicated cosplayers can actually screw it to a doorframe for that, well, ‘authentic look’. But the EDD also has three magnets in the base, allowing it to be mounted to metal surfaces such as the pillars at Place Bell for the next Rainbow Six Invitational.

The last obstacle before me was the design of the front plate. In-game, the EDD is a hollow container with an explosive charge behind a bag filled with screws, nails, nuts and other shrapnel. For obvious reasons I would not be able to do this with real screws and whatnot. I’d likely get a visit from the police if I did…

I opted to model screws and nails onto the front panel, and have it as a 3D-printed insert. This proved a challenge, as the file size for this part reached 250MB – the cap for PrusaSlicer at the time without crashing. I was a bit nervous about the print as there are a lot of overhangs and orphaned bodies, but 8 hours later and it came out pretty decent! A few bits of stringing, which I can’t avoid, but are easily cleaned up with a blast from the heatgun.

One of the trickier parts to design was the electronic backplate. In-game, it’s a green PCB with a switch or button, and a few wires. I had thought about using real PCB’s and attaching 3D-printed parts onto it, but sourcing them was difficult and I wasn’t sure having a reliable source in future would be sustainable. I designed the PCB in Fusion360, and printed it in resin before handpainting it and attaching the 3D-printed parts.

Finally, it was a case of putting it all together and finishing the prop. The electronics were attached, the parts glued together and painted if necessary (the mounting plate is the only piece requiring painting now), and it’s ready to go!

I wont lie. This was a challenging design, and in hindsight I can see why I was anxious about proceeding with it. There were a lot of lost hours making this in Fusion360, a lot of stress and a lot of restarts. But, overall, I’m very proud of the design and the end product.

The only piece left to do at the time of writing this is the mounting plate. I had plans to paint it in wood grain, but the supplies I needed (and they are very specific supplies) aren’t yet available. So, for the time being, I will simply leave it black.

I’m happy with the progress I made with the EDD, and pretty sure it’s something all Kapkan cosplayers will be proud to use as part of their outfit. I hope to see a few of them at the next Rainbow Six Invitational, too!